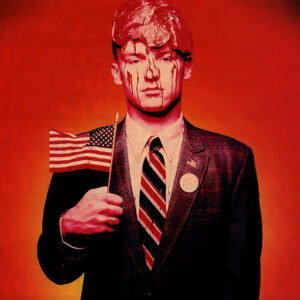 ‘He sleeps with both eyes open…’

Filth Pig is an understandably maligned and divisive album as it is by no means an easy listen. It marked a considerable departure from the three albums that preceded it, which were fusions of industrial music with rock and metal that had earned them critical praise and commercial momentum. Filth Pig meanwhile was met with negative reviews, a disappointed fan base and poor commercial performance. It could be called a trend-hop given some of the influences present and the departure from their trademark industrial metal sound, though other influences present and the resulting complete package points more towards an experiment that many would argue did not pan out. On the contrary, I firmly believe this to be a very successful shift in the band’s sound and one of their very finest albums; even if it isn’t iconic or influential like what preceded it.

There are a few different influences that run throughout the music here, but the foundation is essentially a significantly slower take on the industrial metal of Psalm 69, though Al’s vocals remain a uniformly distorted, harsh shout and there is little sampling to be found here. The pounding of the drum machine here occurs at a significantly slower tempo and the thrash-inspired guitar riffs of old have morphed into droning, lumbering sludge riffs, replete with guitar feedback, tremolo and a sense of melody that ranges from traditional to off to non-existent. Comparisons to Streetcleaner-era Godflesh can be made in how uncompromisingly heavy, slow and brutal the music is, though it possesses a significantly more melodic and human touch and a sense of groove that wasn’t present on that starkly mechanical effort. Sludge and alternative metal are the influences responsible for this – on many tracks here there are significant nods to Alice in Chains and Crowbar. Most of the music operates with this blend; a sort of heavy/sludge/industrial metal hybrid that is uniformly slow, droning and crushing. Following on from these influences the atmosphere here is relentlessly negative and dark, being a combination of the bitter world-hating of Eyehategod and early Godflesh as well as the drug-addled and meaningless self-loathing of Alice in Chains (fitting, given that Al’s heroin addiction fuels the darkness on display here.) Ultimately this combination is so effective thanks to simple yet evocative instrumentation and similarly blunt and effective lyrics. The songs here are haunting and powerful; conveying perfectly what was going through Al’s head at the time from laser-focused hatred of those who wronged him to unhealthy obsession with a past lover to drug-fuelled nonsense.

The album is remarkably consistent in terms of quality, tone and style, and throughout the album the production is excellent with the music boasting a massive, sludgy guitar sound and heavy, pounding drums that give the music a lot of punch, along with a great mix that lets everything come through clearly while not making the sound too mechanical or clean. ‘Gameshow’ stands out as being the most atmospheric, melodic, depressing and drawn out song on the album, even featuring one of the few instances of Al’s forlorn clean singing. This is clearly by design – to overload the album with strung out sorrow would reduce the impact of it. Most of the remaining tracks here are less sorrowful, harsher, more direct and more atonal takes on the same sound, most notably ‘Crumbs’, ‘Lava’, the title track and ‘Useless’. The opener ‘Reload’ is an even more direct and blunt take on this sound; it’s a fairly brisk and noisy track with a particularly crackling beat and a ruthless, vengeful attitude espoused in the lyrics.

A few songs towards the end here do have some other influences worked into them, however – ‘Dead Guy’ has an almost-rapped cadence to the vocals and a very Helmet-esque groove, and while it has the potential to be a tacky and misguided trend-hop it goes over very well, sacrificing none of the feel or songwriting quality present here. ‘The Fall’ is in some respects more in line with their older material, with its booming drum machine and less sludge-influenced riffing, though the gigantic guitar tone and the blunt, defeatist lyrics still makes it fit snugly into the album. Bob Dylan’s ‘Lay Lady Lay’ is transformed from a quaint country rock song into a coke-fuelled obsessive plea for a woman to stay the night – it stands out for its remarkably joyful riff during the chorus and the prominent acoustic guitar line during the verses, and is about as good a cover as can be as the band really make it their own, fitting in well here both thematically and musically. ‘Brick Windows’ is an uptempo psychedelic industrial/alternative metal track that juxtaposes its negative lyrics with its bizarrely upbeat, melodic main riff, giving a bittersweet and hypnotic note to end the album on.

It’s a shame Filth Pig is such a criticised album; it is understandable that many would be turned off by music that is so bitter, hopeless, self-loathing and otherwise negative but the sheer strength of the material here clearly never shone through for most. This is easily one of Ministry’s best albums: it’s an atmospheric masterpiece and a landmark album for the band and metal in the ’90s. This is not an album that grows on a listener quickly (it certainly didn’t for me), but give it time and plenty of listens and the music might just win you over.

If ever there was an overlooked classic, this is it. When Badmotorfinger is actually remembered it’s largely known for being one of the lesser grunge albums released in 1991 (commercially being overshadowed by Ten and Nevermind), and the album that preceded the smash hit Superunknown – and even then the songs that stick in the minds of most are the three singles: ‘Rusty Cage’, ‘Outshined’ and ‘Jesus Christ Pose’. I’d say there’s a lot more to this album that meets the eye; to my mind it’s an excellent metal album and one of the greatest albums of the era, and it remains the band’s best album, in my eyes. I also feel that there are some musical characteristics to this album that often missed, perhaps a side effect of only 3 of its tracks remaining in the memories of most.

In general this album is rather dense, varied and inaccessible take on heavy metal, with it exploring multiple strains of the genre as it filters in different influences and songwriting styles. For example, in the first 3 songs the tracklist goes from ‘Rusty Cage’, a speed metal song with a crushing doomy ending, to the catchy mid-tempo heavy metal/hard rock influenced ‘Outshined’, to a foreboding and torturously slow doom/sludge metal dirge loaded with shrieking in ‘Slaves and Bulldozers’. This is a trend that continues throughout the album; it’s comprised almost entirely of curve-balls with no real pattern to anything and it makes for a very interesting and satisfying listen. Through the various twists and turns the album takes by featuring these very different songs one after the other, as well as the odd nature of the music itself, Badmotorfinger quickly reveals itself to be one strange album.

Of course, the band members themselves need the musical chops to pull off the various musical ideas, and indeed they do. The album is filled to the brim with excellent guitarwork, with riffs that draw from heavy, doom, stoner and sludge metal, with some nods to hard, psychedelic and alternative rock in the simpler, groovier and noisier style the guitar riffs sometimes take. They even play with unconventional time signatures and alternative tunings throughout the album in a way that feels natural – it feels as if they’re doing so to give the music a strange and off-kilter feel as opposed to showing off. The drumming is always appropriate and engaging, ranging from the steamrolling aural assault witnessed on ‘Jesus Christ Pose’ to a timekeeper that drives the band forward on the rocking ‘Drawing Flies’. The leads are tasteful, emotive and technical, and highlight the classic rock influence that occasionally rears its head on the album. And of course there’s Chris Cornell’s singing – the man really is one of the greatest rock singers of all time, because he has it all: an astonishing four octave vocal range, superb emotive and expressive capability, attitude, personality, and sheer sonic power. He also shows incredible versatility, ranging from a foreboding, booming mid-range to fiery and passionate wailing and on several songs (‘New Damage’, ‘Room A Thousand Years Wide’, ‘Slaves and Bulldozers’) throwing in some truly unhinged shrieking to go with the equally unhinged music.

Obviously having a lot of ideas and being able to pull them off is one thing, but they also need to be backed up with varied and interesting songwriting: this is the real strength of the album. The culmination of this is ‘Jesus Christ Pose’, with its controlled and effortless progression in structure and riffing and its extremely dense atmosphere. Across the rest of the album, whether it’s a short, fast song (‘Face Pollution’), a more psychedelic song (‘Searching With My Good Eye Closed’ or ‘Somewhere’), or an absolute crusher (‘New Damage’), the band always manage to keep it fresh with change-ups in the riffs and the basic verse-chorus structure (sometimes dispensing with it entirely) and never following a formula from song to song. In the process the band show themselves to be versatile musicians who can expand upon a basic template of Sabbath-inspired metal in multiple ways. Another thing to commend is its consistency; every song, even the less popular and well received songs towards the album’s end, are excellent examples of the band’s unorthodox approach to their style. Pretty much the only bad idea across the entire tracklist is the ridiculous and pointless intro to ‘Searching With My Good Eye Closed’, which serves only to draw out the song longer than it needed to be while being stupid at the same time.

One of the best examples of what this album is about is the aforementioned ‘Jesus Christ Pose’. In its 6 minutes it wastes no time in establishing itself as a seriously frenetic number with thrash-like, rolling riffs over a similarly rolling and pummelling drum beat and yet another stellar wailing/shrieking performance from Chris. It never lets up in its momentum or establishes a hook for the listener’s mind to return to, flowing effortlessly from one riff to the next with no let up. Then of course there’s ‘Room a Thousand Years Wide’, which may be an even better example of how odd this album is: it is 4 minutes of one chugging doom metal riff with its final minute being consumed by a blaring saxophone solo and more of Chris’ shrieking; it really is as absurd and wonderful as it sounds. I think these two tracks kind of sum up the album as a whole; it’s weird, wonderful, seriously creative and just a little left of field. Don’t let its quirks put you off, give it some listens and over time its wonders will be revealed to you. This is one of the greatest metal albums of all time; essential for any metal fan.